Why you should think twice before sending to a purchased list

Providing an SMTP service to thousands of organizations give us here at SocketLabs a very interesting insider perspective into the messaging patterns and decisions of our clients. We are constantly working to help those sending on our platform to understand best practices and ensure that all mail being processed complies with our Acceptable Usage Policy.

It sounds crazy, but our clients don’t always listen when we say, “Don’t buy an email list… EVER!”. The desire to contact a larger base of addresses is at the heart of every organization’s strategy. Achieving this goal the right way may take more effort than buying a list, but it is effort well spent.

Can the repercussions of buying an email list really be that bad? Yes! Not only will it jeopardize your service with us at SocketLabs, but here is the data proving why it is a bad idea.

In April, our Abuse team was alerted to changes in statistics for a particular client. This client had been with us for some time and maintained a fantastic reputation for the legitimate opt-in alerts and newsletters they sent. They had an existing database of a few hundred thousand addresses, but they wanted more and bought an email list from what turned out to be an unscrupulous broker.

It only took a few short hours to completely destroy their hard-earned reputation. With the sending of a single newsletter message to the newly purchased addresses, our client’s dedicated IP address became listed on 7 different blacklists. The IP address’ SenderScore, a third-party reputation scoring service provided by ReturnPath, dropped dramatically from 99 out of a possible 100 all the way down to 19.

Our Abuse Team immediately took action by temporarily suspending service and contacting the client to determine the root cause of the drastic changes. The client immediately realized the mistake that had been made and agreed to discard every single address from the purchased list.

Throwing out the bad list didn’t immediately resolve their issues, however. Their reputation as a quality sender with the major mailbox providers was destroyed by that single sending. Their rate of users hitting the “This is spam” button increased nearly 1000%, as over 2% of the addresses on their purchased list marked the message as spam. The rate at which messages failed due to invalid addresses also skyrocketed.  These reputation changes along with multiple blacklistings caused later valid messages to be blocked and filtered to the spam folder at significantly increased rates.

The side affect of not being able to reach their valid customer base cost the organization much more than any benefit gained by increasing their list size. Their issues continued on for quite some time. After two weeks I check backed in with ReturnPath’s SenderScore.org reputation tool and found they were on their way to restoring their reputation and likely beginning to reach their customers’ inboxes once again. 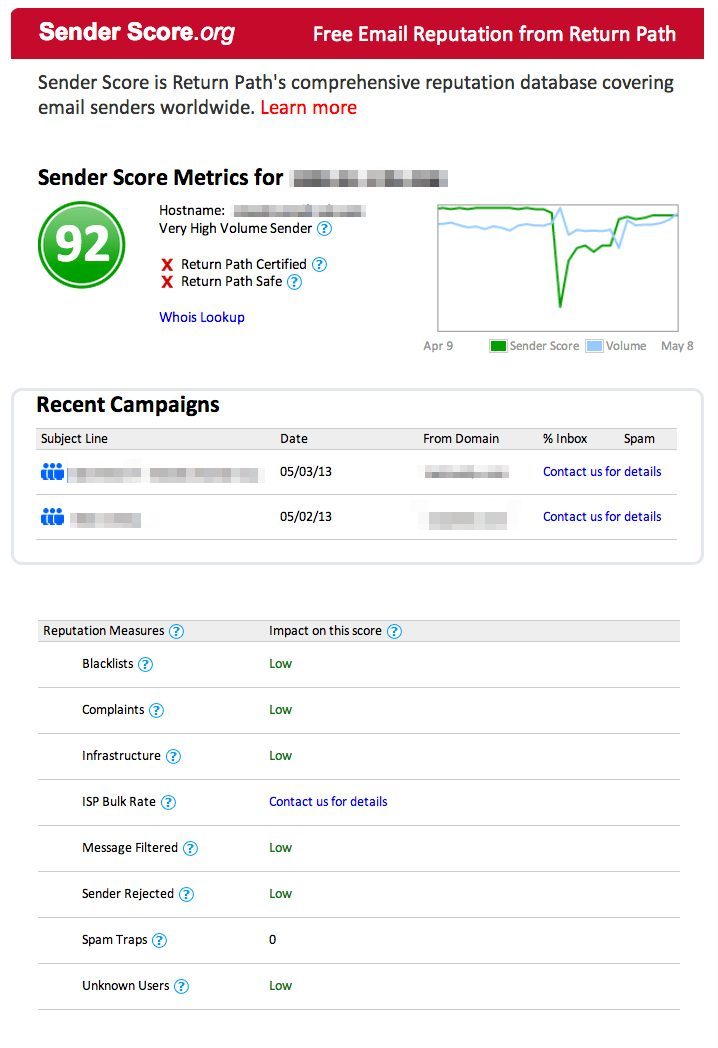 The good news is that reinstating best practices in terms of address acquisition techniques allowed our client to redeem their reputation. I doubt they will ever buy a list again after the headache it caused them! This is an obstacle that an organization can overcome to recover a positive reputation. Nearly one month later, the dedicated IP address of our client was successfully restored to 99/100. All of the blacklistings were delisted, and they were close to seeing the high delivery rates they enjoyed prior to their list purchase.

The data here is loud and clear: sending to a purchased list is a bad idea!  We highly recommend following best practices when it comes to acquiring and maintaining your lists. It can have a tremendous impact on the effectiveness of all of your email.